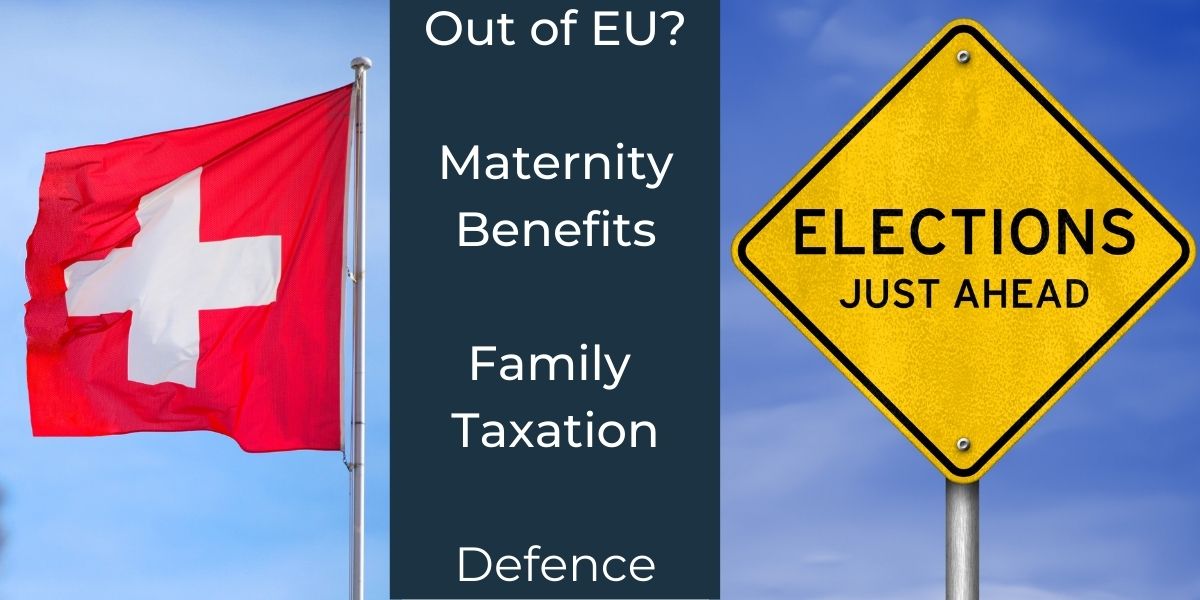 In Switzerland a number of key votes were stalled because of COVID-19 and the impact of coronavirus.

This means there are some very important votes which are upcoming and “off the radar” for many non-Swiss.

Yes, you read that correctly.

The right of free movement of persons applies between Switzerland and the member states of the European Union (EU).

It allows EU citizens to live, work and study in Switzerland, subject to certain requirements, while Swiss citizens can do the same in the EU.

The Agreement on the Free Movement of Persons (AFMP) is one of the seven bilateral agreements that Switzerland and the EU have negotiated as a package known as Bilaterals I.

This measure was successfully proposed by the SVP ( well known for its racist posters which shock visitors and international non-Swiss residents ) and other minor parties.

Should the vote be successful, it will act as a break clause on other agreements. If the AFMP is terminated, the other six agreements automatically cease to apply (by virtue of what is known as a ‘guillotine clause’).

It will end the free movement of persons with the EU and force the Federal Council to negotiate a way of terminating the AFMP with the EU within twelve months.

Should these negotiations fail, the Federal Council must unilaterally terminate the AFMP within a further 30 days.

There is no side-step measure to circumvent the legislation and vote. The initiative also prohibits Switzerland from entering into any new international obligations that grant freedom of movement to foreign citizens.

Chance of success: moderate to low

Nearly all political parties oppose the measure, the  FDP and SP especially.

Amendment of the Hunting Act

This is a great example of Swiss democracy at work.

The 1986 Federal Act on Hunting lays down rules for the cantons on which wild animals are protected, which species of animal can be hunted and when close seasons apply.

In a few locations, packs have formed and because wolves need to kill sheep and livestock to survive, some villagers and canton authorities  are seeking legal protections to manage the wolf numbers.

The Federal Parliament has written new revisions to the Hunting Act which are being disputed by conservationists.

Hence the referendum against the new proposals.

The proposals retained the wolf status as a protected species whilst at the same time making provisions for other habitats and conservation measures which are not to the liking of all and a new set of proposals will be required if this vote is lost by the Federal authorities.

Amendment of the Federal Act on Direct Federal Taxation

Canton and Federal tax allowance changes are proposed to support the workforce and childcare providers with a review of limits and the way the tax is collected.

Under the system of direct federal taxation, families  can deduct CHF 6,500 from their taxable income for each child.

They can make a further deduction of up to CHF 10,100 per child if they send their child to a children’s day-care centre while they are at work.

This amount is not affected should any or both parent become unemployed.

The problem for voters seems to be the amount because the Federal Council and Parliament want to increase the maximum allowance for childcare outside the family from CHF 10,100 to CHF 25,000 francs per child for direct federal taxation.

The allowance for some families is far greater than the actual cost of childcare.

Federal authorities want to help make it easier for parents to work and raise a family, and so at the same time alleviate the shortage of skilled workers.

It will reduce Federal tax revenue by at least  CHF 10 million every year.

Parliament has also decided to increase the general allowance for children from CHF 6,500 to CHF 10,000.

This will reduce the tax burden on families irrespective of their choice of childcare. It will also lead to a further reduction in tax revenue, estimated before the corona crisis at CHF 370 million.

The cantons would normally receive a share of the revenues from direct federal taxation, they will each lose out by up to 20% of the total  reduction in revenues.

This impacts the weaker cantons already struggling financially and will benefit nearly 60 per cent of families that pay direct federal tax.

This is a counter proposal to a measure advanced by the Federal parliament following a previous referendum where parliament watered down the proposed terms.

Currently working mothers have a statutory right to 14 weeks’ paid maternity leave after the birth of their child.

For fathers on the other hand, the law allows just one or two days off work.

The bill provides for the introduction of two weeks’ paid paternity leave. It can be taken within six months of a child’s birth.

Compensation will be paid for income lost while on paternity leave.

The rate of compensation will be the same as that for women on maternity leave: 80 per cent of the average earned income before the birth of the child, up to a maximum of CHF 196 per day.

If the bill becomes law, the Federal Social Insurance Office estimates the cost of two weeks’ paternity leave at around CHF 230 million a year.

This will be funded, as is the case for maternity leave, under the Loss of Earnings Compensation Act (EO), i.e. primarily from contributions paid by working people and their employers.

The bill is an indirect counter-proposal made by the Parliament in response to the popular initiative ‘For sensible paternity leave – that benefits the entire family’.

It has been withdrawn on condition that the bill for two weeks’ paternity leave becomes law.

People were unhappy and generated the required number of signatures to call a referendum against this bill, hence the vote in September.

Federal Decree on the Procurement of New Fighter Aircraft

The current jet fighters are old and not fit for purpose in a modern tactical or emergency response environment.

The Swiss also lack a ground to air missile capability (2018 Defence News Article) They need an air defence strategy because everyone remembers the need to get “French help for a hijack response.”

The Federal Council and Parliament need to find a replacement jet solution by 2030. Then the current jet fleet will have to stop flying.

The bill proposed by the Federal Council and Parliament provides that Switzerland will purchase new fighter aircraft by 2030 at a cost of 6 billion francs maximum.

The aircraft manufacturer that is awarded the contract must in turn award contracts to Swiss companies worth at least 60 per cent of the purchase price (Ruag a clear winner).

These contracts will be shared among the language regions.

The package for air defence has been under discussion since 2018, this referendum was  called against the recent Federal Decree.

Many voters see this as a fantasy project after the missile debacle (could not find target in the fog), procurement issues whilst others see it as a path to greater security and participation on wider stage (NATO, European Military Force).

Chance of Success: 50:50 It could win today and be contested on other Federal decisions later.

Your help sharing this Zurich vote post with others is appreciated