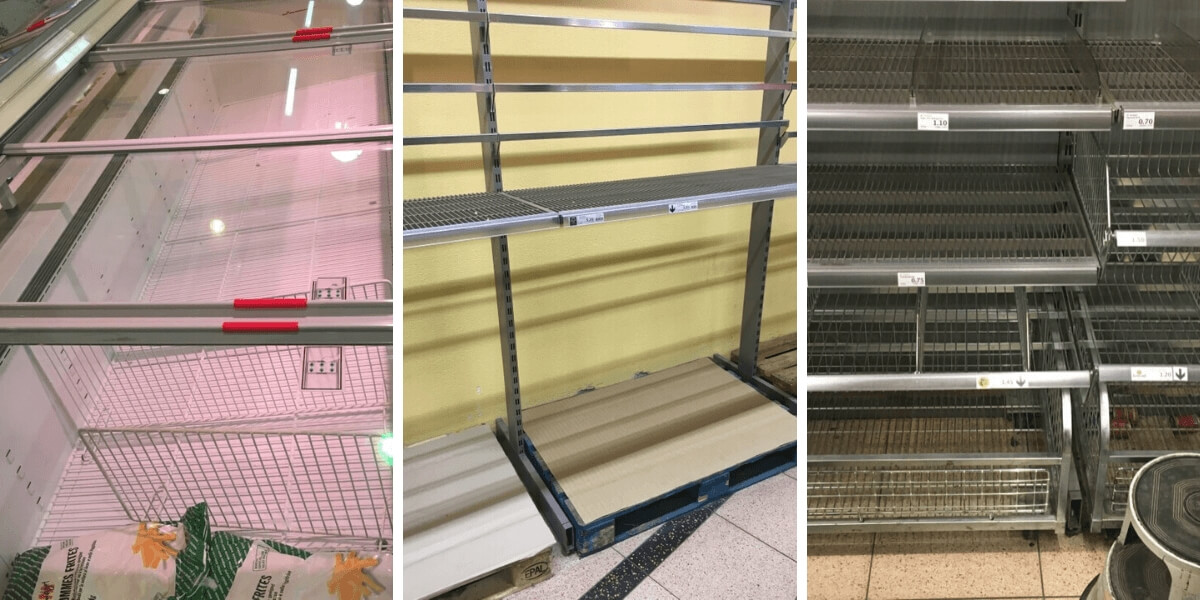 Friday 13th - The Day The Chaos Came To Zurich

It had been relatively quiet on the shopping front compared to other cities in the world. Pharmacists had reported limited numbers of masks for sale and alcohol based sanitisers were difficult to buy as of last week.

To explain what happened because Switzerland has been under different advisory levels for a few weeks, one can only look to the Federal announcement on new measures, the news many schools were to close next week and employers requesting staff to work from home.

I only found out because I went for a haircut and my barber asked if I was going shopping afterwards. Somewhat surprised, I said no. This was at 3.30 pm, so I wandered across the road to the local Migros as I was early for the bus or tram.

It seemed to be busy, I went off for my meeting and thought I will drop into another store at close to 5 pm. A totally different story, it was packed. More importantly there were no hand baskets and just to carts by the door.

I went in for the few bits and pieces I needed and got out 20 minutes later. A panic buying session had begun because many normal products were not on the shelves, eggs, toilet rolls and bread to name a few.

Taking the tram to get home, I rode for an extra stop and popped into a Migros.

The Migros staff member was standing by the front door advising arriving shoppers “the store is very empty, we do not have many things left, please understand.”

I and others simply said hello or thank you and walked past him to shop.

To the Zurich visitor, it may have looked like we were approaching a holiday, to the local this was very different, not even the last hour of shopping before Easter or Christmas looked like this. There were many shelves shut, oddly grapes but no bananas, apples or pears and a lot more missing produce or food goods.

My curiosity was fuelled by this and I started to speak with a Swiss Zurich resident of 30 years who told me she thought a war had broken out.

She was lucky, she had just bagged the last small packet of premium toilet paper and was smiling. Her hand basket was close to empty as she had planned to be away for the weekend with her husband. When she saw the chaos as she called it, she was going to go home and tell him they were going to be shopping as well during their trip.

Another shopper joined the conversation and he was laughing, he told us if we thought this was bad we should go to a nearby Denner where the queues were really big. He went there for some wine but decided it was quicker and to pay more at co-op city or pronto.

The reality for Zurich city contrasted completely with outside the city. One group member in the  Bülach area was laughing at the Zurich situation because his local Volg was well stocked, had toilet paper and he was offering to trade “for the right price” thinking I was desperate for a roll or two.

The 14th is a new day, I will drop into Migros and Co-op again, not for toilet paper, I have sufficient, just something for lunch, a couple of beers and some flour to make bread with to get me to Tuesday when most stores will be re-stocked.

To find your local retail shops and other stores using Filialsuche.ch

Zurich Shopping Update - One week after "the big one"

20.03.2020 – Toilet paper hardly seen for a week, food supply patchy according to stores

One week later and having visited a number of stores in the week, there is clearly a problem in trying to re-stock.

Zurich residents are no different to those in other cities or countries around the world. Migros Seebach N.Zurich staff explained they may get some toilet paper (usually around lunchtime) and within minutes it has gone. They have just restocked their bananas but do not expect them to last long. Unusually compared to some other member reports for other stores, they have a lot of cheese readily available and fresh meat at the deli counter.

Migros online store leshop.ch now has this message on its website:

Earlier this week shoppers had a 20 minute wait on their website as shoppers, many household products are out of stock.

Dettol disinfectant spray and wipes are not available. The more expensive Dettol dual action clean and disinfect tissues are at CHF 7.95 plus delivery but who knows for how long. Bleach (javel) is available depending upon your area/local store.

There are no restrictions for baby food and other products using le shop, the problem is finding a delivery slot between today and early April.

Two weeks later and having visited a number of stores in the week, there is clearly a problem in some areas regarding re-stocking.

Own brand goods for Migros, Denner and Co-Op seem to be in short supply in the dairy area, more expensive similar branded products are evident.

The supply of the basics is good, there is certainly an abundance of dairy products in most stores, Lidl seems to have been the first to get close to 100%. They seem to be ahead of Aldi for quality of their supply chain. They also have a smaller retail footprint than Migros or Co-Op.

It is clear that shopper behaviour is the reason why the stores are not quite back to where they are, certain items do leave the store quickly when stocked a few store managers reported. There is certainly no toilet roll problem as before, there is still pressure however on cleaning products and related domestic plastic/rubber gloves.

Hand sanitizer prices have stabilised to CHF15-25, you can find it at some pharmacies, a number of members made their own using  “Spiritus” ( surgical spirit or rubbing alcohol or “Alkohol ” – view post). Cost CHF5-10 plus your other contents and bottle or sprayer.

Please note – Make sure you do not ask for “Brennsprit” because it has an additive to make it undrinkable (just in case you decide to use it for another purpose).

Still be aware of the corona virus transfer risks when shopping

Swiss retailers have in the main closed up their shops after the order last week except for food stores. Most have no obvious form of control at the door, as a shopper as you enter you have a choice:

The evidence of the suggested token system touted last week seems light in Zurich. Inside the store, not a lot of social distancing simply because people have to shop.This means knowing the virus can remain active on surfaces, plastic or otherwise presents a small but evident risk to the shopper.

Weighing scales or self-service checkouts, there is no way to wipe or know when last wiped by staff.No communication panel to advise what to do or where to get a spray to self-clean evident.

Checkout staff protection and use of gloves is variable depending upon shop, brand and Zurich city location. Clear industry self-regulation policies are in place and there are no formal controls by the Mayor of Zurich or other city authorities.

It should change and may change, all checkout staff should have the ability to seek and have protection, even if it is just the wearing of surgical type gloves. Not all checkout areas and tills can have the protection as in some stores of perspex partitions.

All customers using the fresh goods weighing scales should see a member of staff actively wiping and cleaning the devices, even if they take one or three out of service.